Stephen Amell and Alexander Ludwig attend the game between the Miami Heat and the Atlanta Hawks at State Farm Arena on March 03, 2022. cjeck out! They’re back! Join Nocking Point Co-founders Stephen Amell and Andrew Harding on the pilot episode of their new podcast “Dudes Being Dudes”. This episode brings it back to where it all began. They discuss the revival of “Dudes Being Dudes In Wine Country” in podcast form, all things Nocking Point, NFTs, Team USA Women’s Olympic Hockey Team and just how big Michael Jordan’s yacht is. Tune in!

Heels, the wrestling drama starring Stephen Amell and Alexander Ludwig, has been renewed for Season 2 at Starz.

What’s more, the premium cabler announced on Wednesday that Trey Tucker (who plays Bobby Pin) and Robby Ramos (as Diego Cottonmouth) have been promoted from recurring to series-regular status ahead of the series’ 2022 return.

Heels follows Jack Spade (Amell), a family man and wrestler with big dreams to expand the Duffy Wrestling League beyond its small-town roots — which is made even more difficult by rival company Florida Wrestling Dystopia attempting to poach his kid brother Ace (Ludwig).

“It’s clear from the critical and fan acclaim that the stories and characters from the Duffy Wrestling League have made a connection with audiences bringing a community that is not often found to premium TV,” Starz president Jeffrey Hirsch said in a statement. “I’m excited for our amazing cast and executive producers to get back into the ring together for a second season.”

Season 1 ended on Oct. 10 with Jack and Ace exchanging real blows in the ring, and Crystal (Kelli Berglund) becoming the DWL’s first female champion. Series creator Michael Waldron (Loki) previously opened up to TVLine about his hopes for Season 2, including the potential to explore the fallout from that main event match.

“You can argue that some of the best matches and storylines [in wrestling] are happening in the women’s division. There’s that same opportunity for growth and expansion within the DWL, so it’s going to be interesting to see what Jack does with them,” Waldron said. “Kelli Berglund is obviously incredible, and what it would be like to bring in some rivals for her could be a lot of fun.”

Waldron also teased the potential for DWL to succeed if Jack can “cede a little bit of control” and give others like Rooster and Diego the push they’ve been fighting for. “Season 1 is so much about fighting against failure. Looking to the future, it’s interesting to ponder: What are the struggles of success that this team might face together?” he shared.

Check out the promo and press release for the next episode of Heels, that will airs on August 22.

In an attempt to drum up more heat, Jack enlists the help of wrestling veteran, Ricky Rabies, setting Ace up with a full house for his comeback match against Bobby Pin. While Jack tries to make amends with his brother, Ace struggles with the fact that his career as a Face might truly be over.

Hello! Back on August 14, Stephen Amell was at MEGACON Orlando 2021. Our gallery has been updated with HQ pictures, and check! 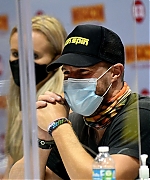 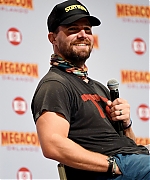 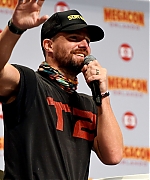 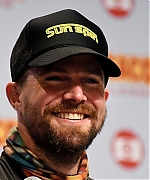 Appearances & Events > 2021 > August 14 – MEGACON Orlando 2021
Page 1 of 541 2 3 … 54 Next »
Advertisement
Who is Stephen?
Stephen Adam Amell (born May 8, 1981) is a Canadian actor, known for portraying Oliver Queen / Green Arrow on The CW superhero series Arrow and its spin-offs. A lifelong professional wrestling fan, he has made guest appearances in major American promotions, including working a match for WWE in 2015, and more recently for Ring of Honor in 2017, joining the popular group known as Bullet Club.... ( Read More...)
Site Statistics